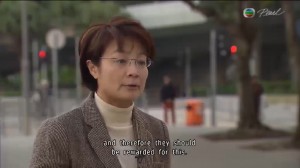 The government has found a new source of renewable energy. And as Evelina Leung tells us, it comes straight from the city’s landfills. Each hour, around 8,000 cubic meters of biogas is released from the Tseung Kwan O landfill. Biogas is a mixture of gases created through the breakdown of organic substances. Up until now, the gas has been burned off because there has been no use for it. During the process, carbon dioxide is released. Today, the landfill operator signed a contract with a gas company to sell this biogas and turn it into usable has for households. For this to happen, a 12 meter long pipe will be built to deliver the biogas to a treatment plan in Clearwater Bay. From there, the recycled gas will be delivered to different households. The gas company said buying biogas is cheaper than buying other natural gases. Sai Kung District Councillor Christine Fong said the gas produced should be used to compensate residents living next to the landfill. She said residents have been living in undesirable conditions for many years and therefore they should be rewarded for this. The Tuen Mun landfill operator is also believed to be in talks with a gas company to strike a similar deal.

6 December 2014
[South China Morning Post] Landfill expansion approved after filibuster battle
Controversial plans to expand the Tseung Kwan O landfill site were finally approved yesterday after six weeks of filibustering by pan-democrats finally ran out of steam.
The vote, by the Legislative Council’s Finance Committee, means an immediate start can be made on a project environmental officials say is crucial to combatting a mounting waste crisis. It follows an agreement last week between pan-democrats and committee chairman Tommy Cheung Yu-yan, to cap the number of amendments submitted on the request.
But people living near the landfill and their representatives were angered by the decision.
“I am extremely disappointed,” said New Territories East legislator Gary Fan Kwok-wai, who took part in the filibustering.
“This is not just an environmental problem but a planning disaster as about 50 towers, each 50 storeys tall will eventually be erected just next to the landfill. The number of victims [affected by the landfill] will be more than doubled,” he said.
Sai Kung district councillor Christine Fong Kwok-shan burned a copy of the environmental impact assessment report on the plan outside Legco and said some residents could challenge the decision in court.
As well as the significant local opposition, the scheme was also caught up in a non-cooperation campaign by pan-democrats, who have vowed to delay approval of government funding requests except those that affect people’s livelihoods. The campaign is intended to pressure the government into offering a better deal on political reform for the 2017 chief executive election.
Environment minister Wong Kam-sing looked calm as the vote was approved. He faces a battle to overcome filibustering on other funding requests, including for the extension of the Ta Kwu Ling landfill in North District, a feasibility study on expanding the Tuen Mun landfill, and a waste incinerator on an artificial island near Shek Kwu Chau.
Built in the early 1990s, the landfill site has been the subject of odour complaints. Without expansion, it would have reached capacity next year. Work will begin before the end of next year to expand the site by 13 hectares, enough to accommodate 6.5 million cubic metres of waste over six years. When the expansion is completed the landfill will only accept construction waste. Other waste will go to the city’s two other landfills.
Some 33 lawmakers, more from the pro-establishment camp, voted to approve the HK$2.1 billion funding request yesterday. Some 19 voted no.
The debate lasted 23 hours in 10 meetings since October 31. The four waste projects are expected to cost HK$30.5 billion.

7 November 2014
[South China Morning Post] City Digest
Christine Fong, aides deny Legco disturbance
Sai Kung district councillor Christine Fong Kwok-shan and her two assistants denied in Eastern Court causing disturbances at the Legislative Council on May 7 and 13, and obstructing a Legco staff member from carrying out his duties. The case was adjourned to December 4. They were released on HK$500 bail each.

1 November 2014
[South China Morning Post] Not in our backyard 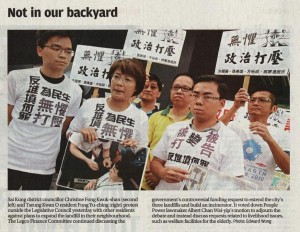 Sai Kung district councillor Christine Fong Kwok-shan (second left) and Tseung Kwan O resident Fong Yu-ching (right) protest outside the Legislative Council yesterday with other residents against plans to expand the landfill in their neighbourhood. The Legco Finance Committee continued discussing the government’s controversial funding request to extend the city’s three landfills and build an incinerator. It voted down People Power lawmaker Albert Chan Wai-yip’s motion to adjourn the debate and instead discuss requests related to livelihood issues, such as welfare facilities for the elderly. Photo: Edward Wong

2 July 2014
[The Standard] A big hug for universal suffrage 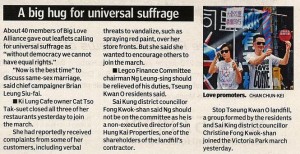 Legco Finance Committee chairman Ng Leung-sing should be relieved of his duties, Tseung Kwan O residents said.
Sai Kung district councillor Fong Kwok-shan said Ng should not be on the committee as he is a non-executive director of Sun Hung Kai Properties, one of the shareholders of the landfill’s contractor.
Stop Tseung Kwan O landfill, a group formed by the residents and Sai King district councillor Christine Fong Kwok-shan joined the Victoria Park march yesterday.the Victoria Park march yesterday.

A controversial government proposal to expand the Tseung Kwan O landfill has got the green light from the Legislative Council’s public works subcommittee.
The 16-9 decision, which came after panel chairman Lo Wai-kwok cut short a filibuster bid by pan-democrats, will need to be approved by the Finance Committee to become final.
Angered Tseung Kwan O residents, however, threatened to take action to prevent trucks from dumping garbage.
The Tseung Kwan O landfill is estimated to be full by next year and expanding it by 13 hectares is expected to extend its lifespan by six more years.
Residents led by Sai Kung district council member Christine Fong Kwok-shan protested outside Legco, black bands over their eyes and their white T-shirts proclaiming “Protect Tseung Kwan O." They were stopped from entering the conference room as placards are not allowed inside.
Security guards also demanded that they remove their T-shirts and accept a warning letter, as well as guarantee that they would not cause chaos in the conference room.
Fong accused the security guards of discrimination and tore up the warning letter before filing with the Complaints Division.
Residents will take further action to protect their homes, Fong said. “That includes occupying the routes in and out of the landfill and blocking the way of garbage and dumper trucks."
She also accused the subcommittee of forcing the vote through and accused functional constituency lawmakers of ignoring the pleas of Tseung Kwan O residents.

Furious shouting from the public gallery and pleas by kneeling residents affected by proposals to expand the landfill in Tseung Kwan O and build an incinerator in Shek Kwu Chau marred a debate on funding.
After a ruckus lasting almost an hour, the Legislative Council’s public works subcommittee was forced to change conference rooms.
The residents heckled and shouted as the subcommittee tried to go through the 100-plus motions raised by Neo- Democrats’ Gary Fan Kwok-wai and People Power’s Albert Chan Wai-yip.
“The minister is ruining my home!" a woman yelled.
Another shouted: “You never visit Tseung Kwan O, so you don’t know how much it stinks!"
They refused to leave the gallery and held hands to prevent security officers from dragging them out.
After an hour of interruptions and shouts, subcommittee chairman Lo Wai- kwok moved the meeting. He banned protesters and reporters from entering but later relented on the media bar.
Outside, protesters – including district councillor Christine Fong Kwok- shan – knelt while others attempted to break in.
They were stopped by guards but were allowed to remain in the corridor to watch the meeting on television.
Secretary for Environment Wong Kam-sing said the government will not change its position.
Fan said Lo was preventing the public from monitoring the legislature.
“It was up to security on how to handle it and it was difficult for me to decide who can enter the conference room," Lo said. He added he barred reporters from sitting in for their safety.
The meeting continues on May 21.
Legco president Jasper Tsang Yok- sing said it is unlawful for the public to disrupt the meeting. “Generally, all panel and committee meetings are open to the public but the chairman can decide to make it a closed-door meeting after consulting members," he said.
Subcommittee member Ann Chiang Lai-wan said Lo should have “scissored the motions." 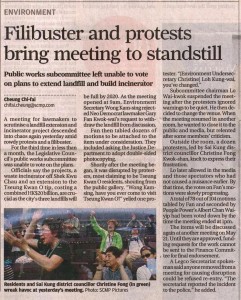 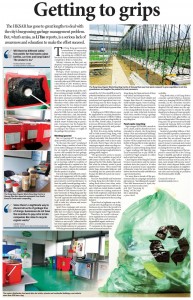 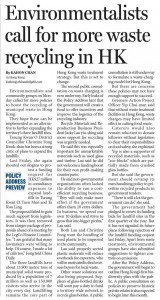 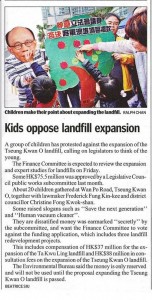 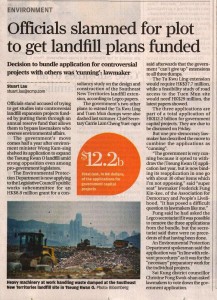